I want to know which are the limits and the needs of FreeCAD and to do that, I am building up a 6 cylinder engine from scratch. All comes out from my imagination, so do not expect that it "runs" smoothly ;) 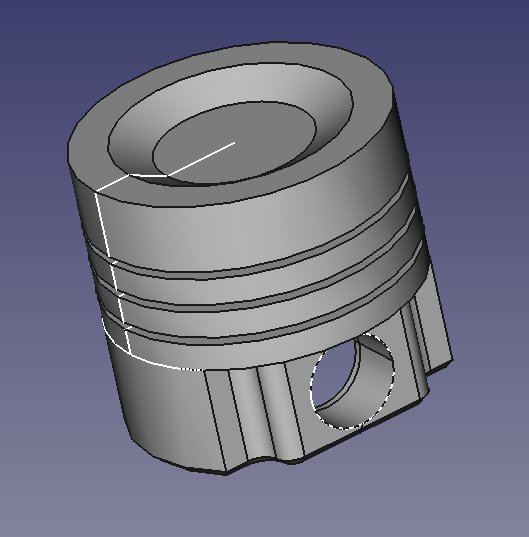 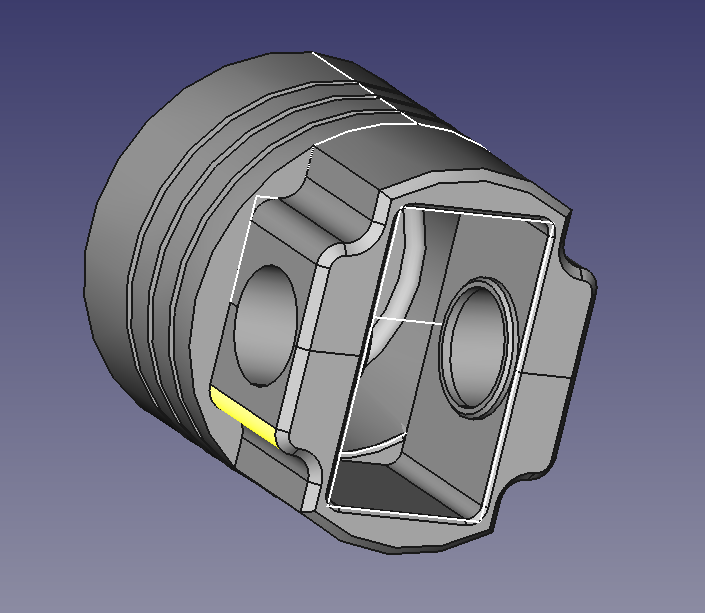 One of the two motor blocks: 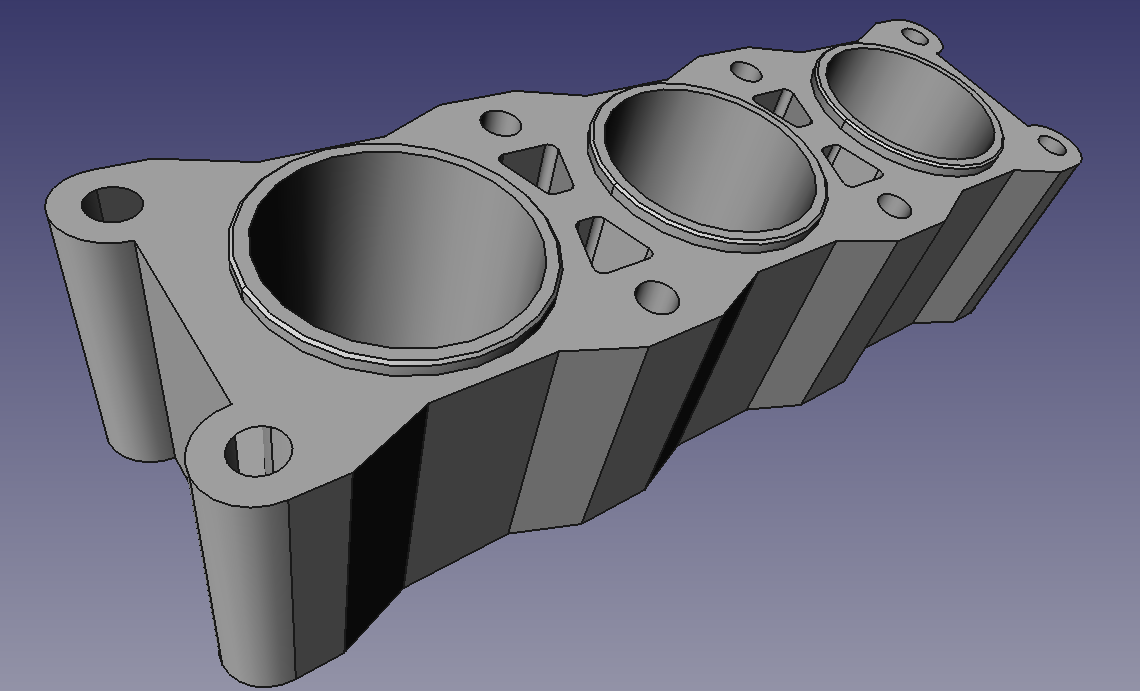 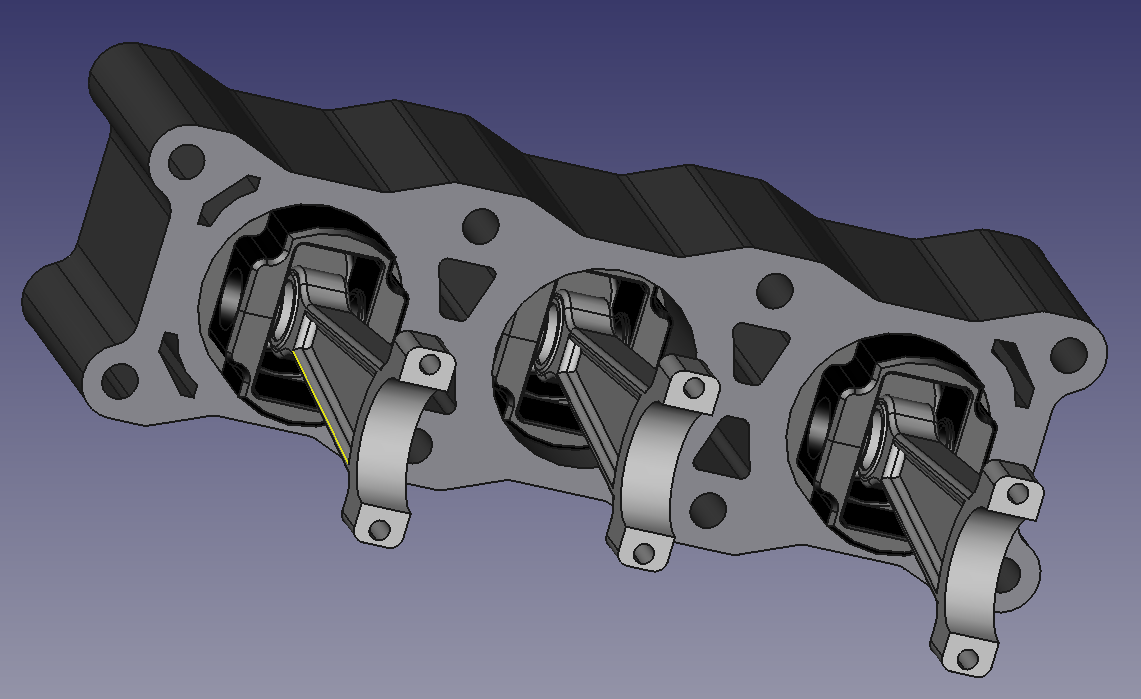 FreeCAD has shown some capabilities that I did not expect and some lacks that made my work tedious. I am not able to create symmetries in sketches, have not found any way to copy-paste and sketch and attach it to a new face and few other things that I will comment in further posts.

¿What do you think about the engine?

I want to create something that creates interest in people and makes them give a try to FreeCAD.

Embedded balls on rings are not really good looking, but until today I didn't figure how to create them without revolving a sketch. Solution has been as simple as creating a torus between rings and substract it to them. (full script at the end of the post) 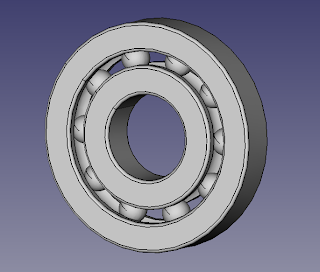 This instruction will create a torus with big radius R1 and small radius R2 at (0,0,0).

To move it to its position in the bearing:

With this you have a groove with a radius R2 a radial distance R1 just in middle of the bearing, a little improvement to our bearing.

After a bit of research I found how to select edges and how to fillet them, just two commands.

First, we create a new variable that I`ve called RR and contains the value of the rounding radius.

To explain the commands I am going to use a box object:

Do not create a very tiny box or making fillet will crash freecad.

Getting the box edges (all) and store them in Bedges new variable:

This instructions creates BFillet object that is our B box with all its edges rounded with an RR radius.

This should be the result: 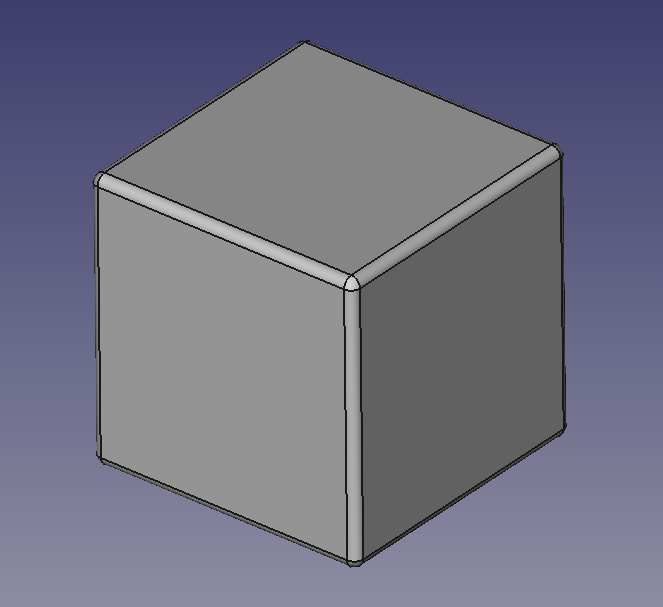 How can we apply this to our bearing? (understand "FreeCad Bearing Script 1" needed)
This way:

Now just round the ring: 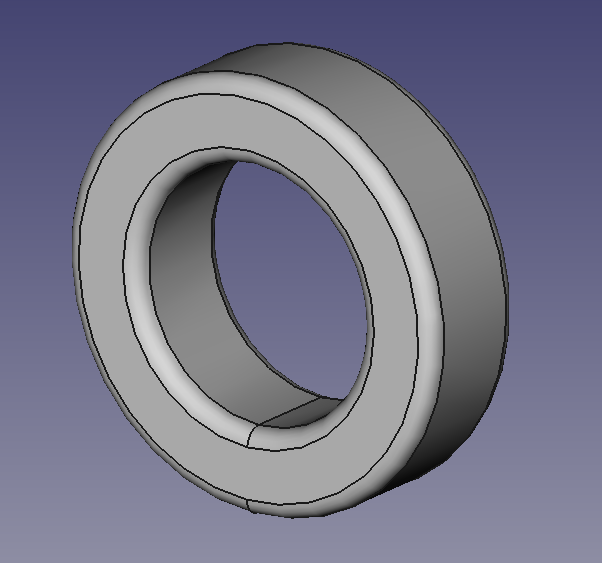 The output of that command is the picture at the beginning of this post.

Added: Video of the script working

Next things to do are grouping all entities in the same object and create a standard bearing generator script.

I have realized that there is no way (at least graphically) to create section views or cuts to 3d parts. A very useful tool to show internals. Also I have not found at the moment any way to measure distance or angles of points, edges, axis... Maybe in the next release.

I started to study FreeCad Python Scripts yesterday and today I have managed to create a very simple script that builds up a very simple bearing. It can be used to figure how will it look in the assembly.

To accomplish this task we will need two libraries, Part and math.

The basic body of a conventional fixed ball-bearing can be built up in several ways. We are going to create 4 cylinders to achieve a very basic body.

Now create the inner ring of the bearing with two cylinders (give your own values to variables):

B2=Part.makeCylinder(R2,TH) #As B1 (variable values in concordance)

At the moment we have created 2 cylinders. Maybe you ask where are them. Ok, when you create an object in FreeCad its view is not automatically refreshed, so if you want to see what is happening, just type:

Let's do the boolean cut that will create the inner ring of the bearing. The next line creates a boolean cut of B1 and B2:

Where IR="inner ring" new variable name. B2 part cutted by B1

if you run: Part.show(IR) you should see a ring like this: 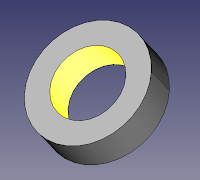 Following the same path, we can build the outer ring:

To solve getting the cylinders mixed with the rings, avoid Part.show() until all operations are finished.

Now a bit tricky part: the balls of the ball bearing.

The command to create a sphere is:

Ball is the name of that sphere and RBall the radius. This will create a sphere at (0,0,0) global coordinates system. Like this: 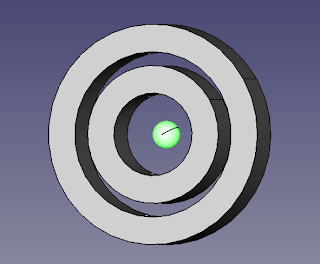 The balls of the ball bearing are not arranged in that position, so new command to move this:

That will move the sphere from (0,0,0) to the end of the V vector. To get this working:

CBall (Ball circle) is the radius of the ball ring, the distance between rings measured from (0,0,0).
PBall is the middle bearing thickness position (If TH=10, PBall=5)

Running: Part.show(Ball) should show this: 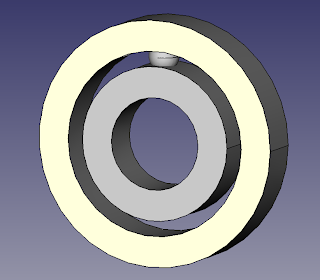 Now we have the sphere in position. But we need more than just one to give this rough bearing a better looking.

Carefully, we can write this "for" loop that creates a number(NBall) of spheres in a equidistant position:

Alpha=(i*2*math.pi)/NBall    #Gets angle between spheres and increases it every time a new sphere is created

BV=(CBall*math.cos(Alpha),CBall*math.sin(Alpha),TH/2)  #Sphere translation vector to a given alpha value

This bucle contains the complicated math part, but the concept is very easy:

Create a ball, move it to its position and increase the angle of the position vector. 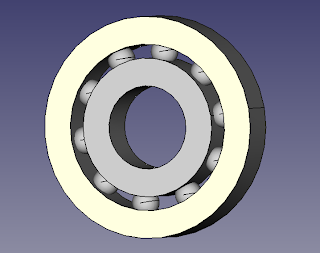 Just a dummy bearing :D
Yes, not very useful at using Freecad, but as FC-python introduction it does the job (I think)

And this is all I know at the moment about FreeCad scripts. The next step is to round the ring edges to get a more realistic look: 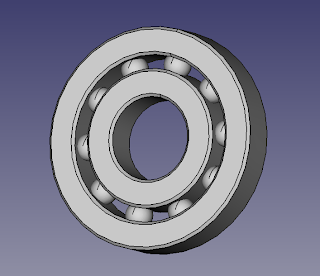 I want to develop a tool that, with a shaft or hole selected, drafts down the bearing that better suits, using a database containing the measures of standard bearings. Maybe too much ambition I think. Okay, I did it  :D

Freecad documentation is poor or hidden and understand errors and commands take time.
I have tried to write this tutorial and explain things as easy as I could. But if you need more explanations, do not hesitate to contact me. But don not think I must know the answer, I am just new here ;).